About the official visit of the Interstate Council President, IAC Chairperson T. Anodina to the Republic of Belarus

Meeting with the Prime Minister lasting over two hours also attended by CIS Executive Secretary S. Lebedev was held. IAC activity in the field of ICAO Standards and Recommended Practices on flight safety implementation in the region and Interstate Council/IAC Program on future enhanced collaboration within the framework of the Interstate Agreement on Civil Aviation and Use of Airspace (Agreement) and IAC-ICAO Agreements were discussed in detail. The program in particular includes development of measures on increasing the accessibility and air transportation cost-effectiveness based on ICAO decisions and also airspace liberalization; ensuring independence of serious incidents and accidents investigation using IAC scientific and technological and human capacity; enhanced training of aviation specialists within the framework of ICAO/IAC Project indefinitely extended in October 2016 by ICAO President and Secretary General and on the basis of established interstate center for specialists training.

Prime Minster confirmed continued support of the Republic of Belarus of implementation of the Agreement and Interstate Council and IAC activity. He particularly appreciated IAC activity in the field of investigation and certification emphasizing importance of appreciation of this activity by ICAO and other international organisations. According to results of ICAO audit IAC received 84,26% on investigation, 80,68% on certification that is above world, European average rate and also rate of contracting states of the Agreement including Russia. The Prime Minister also emphasized that it is particularly important for all contracting states of the Agreement. CIS Executive Secretary in turn emphasized important role of the IAC which is not only widely recognized and supported by parties of the Agreement but also widely known around the world as effective and highly professional international organisation. S. Lebedev also emphasized the critical role of IAC in strengthening integration processes in CIS that is especially significant in current international and economic environment and emphasized the need for further support of IAC and its integration activities.

Previously Tatiana Anodina received full support of IAC activity from President of the Republic of Belarus A. Lukashenko and heads of other CIS and EU states.

Interstate Council President, IAC Chairperson T. Anodina forwarded to the Prime Minister and for report to the President  the program on implementation of system decisions aimed at establishment of advanced air navigation service system meeting world standards and complying with provisions of of ICAO Global Air Navigation Plan and programme on implementation of international, interstate system of professional education with possible involvement of public resources of the Republic of Belarus which were discussed at the meeting.

Parties expressed satisfaction from meeting which was held in warm, friendly and constructive atmosphere. At the end of the meeting the Prime Minister transmitted materials on 95th birthday anniversary of P.S. Pleshakov published in the Republic of Belarus to Tatiana Anodina. T. Anodina expressed gratitude to President and Prime Minister for attention to memory of P.S. Pleshakov and his family.

Following the negotiations in Minsk Agreements on cooperation in the field of accident investigation and prevention with the head of aviation authorities V.B. Kostin and Protocol on cooperation in the field of professional education, air navigation, certification of aviation equipment and international airports between Ministry of Transport and Communications of the Republic of Belarus and IAC were signed.

Agreements mentioned above update and continue all current agreements and fruitful collaborative practices. 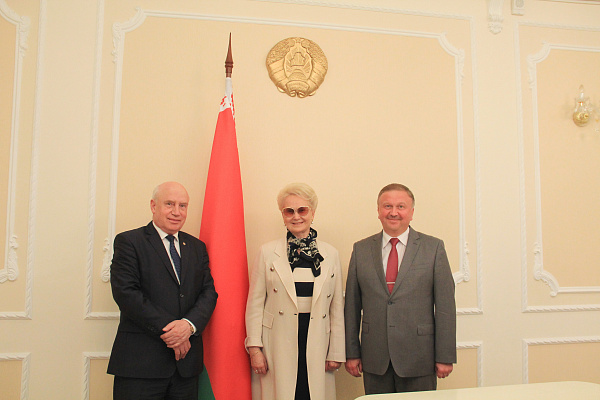