About participation of the IAC delegation in the Inernational aviation forum

At the invitation of the President of the Council and the Secretary General the IAC delegation participate in the International aviation forum in the ICAO headquarters in Montreal on November 23-25, 2015.

Over 800 ministers and senior officials from States, UN and International organisations have gathered at the headquarters of the International Civil Aviation Organisation (ICAO) participating in series of landmark discussions on sustainable aviation development, tourism growth and other critical air transport concerns at the first-ever ICAO World Aviation forum.

This unique event was aimed to strongly support the Organisation's No Country Left Behind (NCLB) goals and bring states and the donor/development community together to help maximize opportunities for everyone by enhancing global air transport to endure more successful and sustainable local and regional prosperity.

"With the air transport sector poised to double in flight and passenger volumes over the next 25 years significant investment commitments will be required towards new airport and air navigation infrastructure and other air transport capacities. It was critical for ICAO to bring together these players now in order to anticipate these challenges in greater detail and to raise awareness on the critical importance of aviation and global connectivity to the future prosperity of societies and economies all over the world" President Aliu highlighted.

ICAO Secretary General added that "in light of its cross-cutting nature and multiple links to other economic sectors of aviation reaches some 3.5 per cent of world GDP equivalent to 2.4 trillion dollars while supporting some 58,1 million jobs. As States all over the world are now working together to realize the social, economic and environmental priorities reflected in the recently adopted UN sustainable Development Goals, ICAO recognizes that the fundamental role of safe and reliable aviation as an engine for social-economy prosperity needed to be re-emphasized so that its benefits contribute to that process"

One of the major theme of the Forum was regional collaboration and resource efficiency. In this regard the IAC representative as a Speaker of a roundtable shred the experience of the IAC foundation - regional organisation that for almost a quarter of a century has successfully embodied ICAO principles in the field of flight safety in the post-Soviet space.


Context of the participants statements and Forum results indicated again how fragile the general aviation structure is, how it is strongly influenced by economical, political and military risks, terrorist threats, and at the same time what strong influence civil aviation has on the global economy and living standards of people from all over the world. Coordination of efforts, collaboration at regional and international levels are the basis of civil aviation successful development in 21 century. 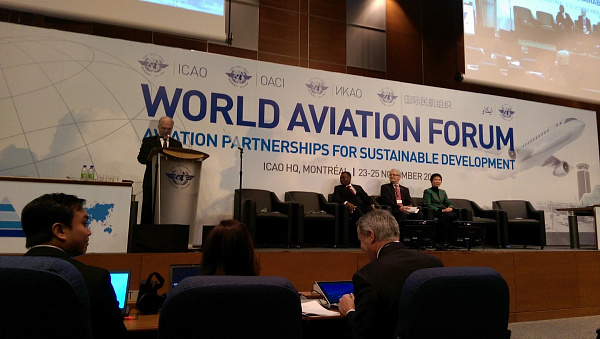