About the Working Conference

The agenda included the following issues:

· Major results of the Council and IAC activity for 25-year period.

· About the activity results of the ICAO Assembly 39th Session;

· Promotion of available and economically sustainable air communication of the Member States of the Agreement and protection of their interest;

· Priorities of international collaboration strategy "Together with aviation world".

Over the years the Interstate Council and IAC could establish and implement efficient and balanced mechanism of global regional collaboration in the field of civil aviation and aviation industry served as a model for similar organizations in other regions of the world.

Paramount international decisions adopted within the ICAO framework are connected with Interstate Council and IAC activity and initiatives:

• international industry cooperation of aviation equipment designers and manufacturers with its region states, European Union, America, China, India and others;

• development and proposal of regional programme on aviation terrorism counteraction which was appreciated by ICAO as one of the best in the world.

39th Assembly Session held last year has become the landmark event in development of collaboration with ICAO. The Addendum to Memorandum of understanding between ICAO and IAC was signed in the ICAO headquarters. The Addendum marks a new stage of collaboration in the field of Standards and Recommended practices implementation in the region of Member States of the Agreement. Signing of the document on indefinite extension of the ICAO-IAC project "Flight safety development and continuing airworthiness" has become another important event. Over 100 different events with participation of about 9000 aviation specialists of the region countries were held within the framework of this project on implementation of the ICAO campaign "No country left behind".

Intensified programmes development of aviation staff, state inspectors training in different fields of aviation industry including aviation security, flight safety, airworthiness and others based on ICAO Standards and Recommended practices and regulatory documents (Aviation Regulations) of the Interstate Aviation Committee is emphasized in prospective project development.

Interstate Council and Interstate Aviation Committee are actively developing practical cooperation in supporting aviation authorities of the region states within the framework of "continuous monitoring" programme.

Interstate and IAC activity for 1991-2016 has proved its efficiency and high potential of its establishment. Further work priorities for the benefit of states - members of the Agreement have been formed and approved. The Conference participants emphasized the IAC substantial contribution to the establishment of single regulatory framework and certification system of aviation products, aerodromes and equipment in the region that today allows to adopt efficient air transport system development policy in order to ensure air transport accessibility and sustainable economic growth of civil aviation development in the region. The participants expressed their determination to rely on IAC in the field of accident investigation, certification of aviation products, engines, aerodromes and equipment that ensures compliance with the highest international standards in the field of flight safety.

Further enhanced regional collaboration in the field of flight safety and aviation specialists training in the light of resolutions of the ICAO Assembly 38th Session has become the important topic at the Working conference. Presentation of Prospective interstate aviation specialists training attended by National Aviation Academy of Azerbaijan, Belarusian State Academy of Aviation, Kazaeronavigation, Saint-Petersburg state civil aviation university and representatives of other member countries was held.

Within the framework of the Conference the participants attended National Aviation Academy which is one of the most innovative and equipped aviation education institutions in Central and Eastern Europe. 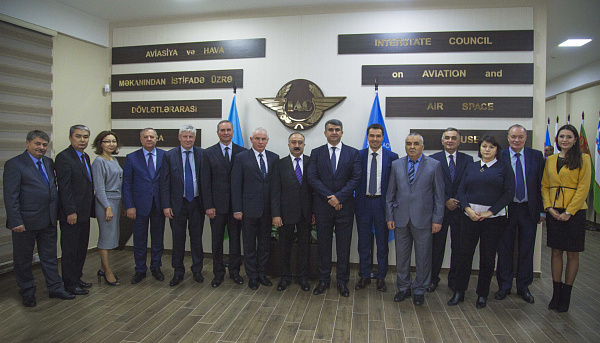