In connection with fatal accident with А-321 EI-ETJ aircraft operated by «Metrojet» ("Kogalymavia Airline" JSC) airlines occurred in Egypt on October 31, in accordance with Annex 13 to Chicago Convention on international civil aviation (ICAO) and aircraft accident and incident Investigation of the Russian Federation (PRAPI) the Interstate Aviation Committee as international independent organisation formed the commission headed by V. Sorochenko - the IAC chief executive. The IAC laboratory leader and leading accident investigation experts are included in the Commission.
In accordance with ICAO and PRAPI Annex 13 V. Sorochenko was appointed as the accredited representative to participate in the fatal-accident investigation and cooperate with investigation bodies of Egypt, France (state of aircraft designer), Ireland (state of registration),
The IAC representative will participate in formed State Investigation Commission of the Russian Federation.
The IAC Investigation team took off to the accident site together with the Ministry of Emergency Situation with which the IAC has had long-term experience of professional cooperation on the basis of international agreement. The IAC team is ready to participate in all stages of technical investigation in accordance with the standards of Annex 13 of ICAO and provide all necessary professional and technical resources for this purpose.
The Interstate Aviation Committee expresses sincere condolences to the families and relatives of those killed in this crash and assures that the IAC experts will make every effort to establish all factors and circumstances of this tragedy, direct and systemic causes of the accident and development of measures aimed at prevention of the similar accidents in the future in accordance with requirements of international standards.

The Interstate Aviation Committee informs that the accredited representative on the investigation of the fatal accident with А321 EI-ETJ aircraft operated by «Metrojet» Airlines and the IAC experts continue work at the crash site. In full compliance with provisions of Annex 13 to the Convention on international civil aviation (Chicago convention) the IAC experts in close cooperation with Egypt specialists, representatives of France, Germany and Ireland participate in all stages of investigation including works on searching and identification of aircraft fragments and copying information of Flight Data Recorders recorders). Work at the crash site is being conducted in close cooperation of the specialists of the Ministry of Emergency Situations of the Russian Federation.
Data from the Flight Data Recorder (FDR) was successfully copied and transferred to the Investigation team for decoding, processing and analysis. Cockpit Voice Recorder sustained substantial mechanical damage and the preliminary works on copying the recorded information are being carried out now in Egypt in close cooperation of the IAC and BEA of France experts in full compliance with all possible precautionary measures.
Examination of flight, medical and technical documentation was started; the analysis of the flight crew members proficiency level, continued airworthiness materials, operation history and compliance with the aircraft maintenance procedures is being made in Interstate Aviation Committee headquarters in Moscow.
The Interstate Aviation Committee reminds again that in accordance with the Annex 13 the official source of information on investigation is the State conducting the investigation (in this case Egyptian aviation authorities). Other states, organisations and specialists participating in the investigation can't disclose information about the investigation without the consent of the state conducting the investigation. In the framework of international legislation the IAC will make all possible efforts to inform public about the investigation process.

The Interstate Aviation Committee (IAC) informs that the IAC experts continue work at the accident site of  А321 EI-ETJ aircraft operated by «Metrojet» airlines jointly with the Investigation team of Egypt and representatives of France, Germany and Ireland.
The Investigation team carried out the preliminary analysis of copied and decoded information of flight data (FDR) and cockpit voice recorders (CVR). Flight Data Recorder stopped recording during climbing at the level 308 (9400 m). Before this operation was in normal mode, no information about systems and aircraft units failures was registered. The preliminary listening of CVR information was carried out.
Collection and examination of the aircraft structure fragments is carried on. Aircraft fragments are found at the area more than 13 km. The Investigation team continues its work in accordance with the ICAO standards and recommended practices.

The Interstate Aviation Committee informs that the IAC experts continue their work on investigation of the accident with А-321 EI-ETJ aircraft operated by "Metrojet" Airlines conducted by Egyptian aviation authority.

On August 28 the specialists of Egyptian aviation authority, Interstate Aviation Committee, BEA of France and Airbus Company proceeded to so-called "layout" of aircraft fragments in hangar in Cairo town where they were delivered from the crash area.

These activities are carried out within the framework of joint action plan in order to complete the investigation.

"Layout" is activity on collection, identification and location of aircraft fragments and engines on horizontal surface along the aircraft outline applied in advance. This work is usually carried out in order to identify sites and consequences of aircraft structure breakup, identification of fire source or environmental effect for studying integrity of steering linkage, hydraulic, pneumatic, electrical systems, etc. This work can be carried out both in order to determine aircraft initial accident cause and confirm or deny different versions connected with aircraft technical status. In special cases when aircraft fragments "layout" on surface (bidimensional reconstruction) don't allow to visualize the fracture pattern three-dimensional reconstruction (usually aircraft targeted section) with fuselage shell fragments and aircraft components location on metal frame simulating aircraft geometry can be carried out.

Other type of such reconstructions is virtual three-dimensional reconstruction when each found fragment is digitized by 3D-scanners (photo, laser, etc.) followed by fragments collection in the form of computer 3D-model. These methods have their advantages and disadvantages and need for any activities is determined by investigation experts. Examples of such activities can be seen on the IAC web-site as well (A6-FDN, 101, …).

One year ago, the air accident with A321 EI-ETJ aircraft occurred in Egypt. Therefore, the Interstate Aviation Committee (IAC) expresses out heartfelt condolences to the close families and friends of victims of this catastrophe.

Currently, in accordance with the international investigation standards (ICAO Annex 13) the investigation team of Arab Republic of Egypt conducts the investigation with participation of specialists from the Interstate Aviation Committee, France, Germany, Ireland, and USA.

By now, the investigation team has collected and analyzed the data related to the crew, the aircraft operation, the aircraft and systems performance during the last and the previous flights. The participants of the investigation have provided the Egyptian authorities with all gained information related to the flight crew and the Operator activities, the aircraft technical state, and the airframe and the engines state. In the course of field phase of the investigation, the wreckage diagram was developed. During the last 2015 year, in Egypt, in Russia, in Germany, in France, the examinations of aircraft fragments and the avionic units with non-volatile memory were performed. In August-September 2016 in Cairo the investigation team with participation of specialists of the IAC, France, Germany, Ireland, USA performed the aircraft and engines surface layout.

In course of these works the point of the aircraft initial destruction in air was localized, and it was determined that the aircraft skin had undergone the high energy dynamic influence (from inside to outside) and that the inflight rapid decompression caused by internal overpressure has occurred. Today the performed works are the subject of further analyses. Some airframe fragments were selected for further examinations. 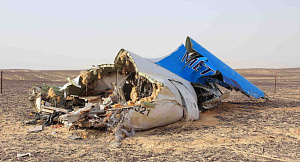 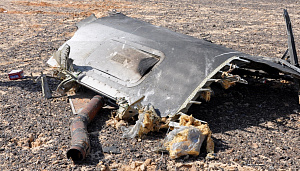 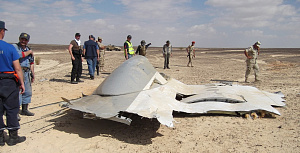 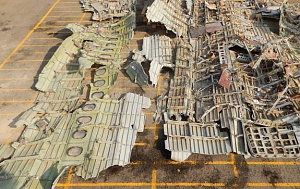 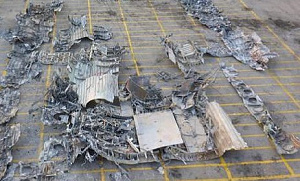 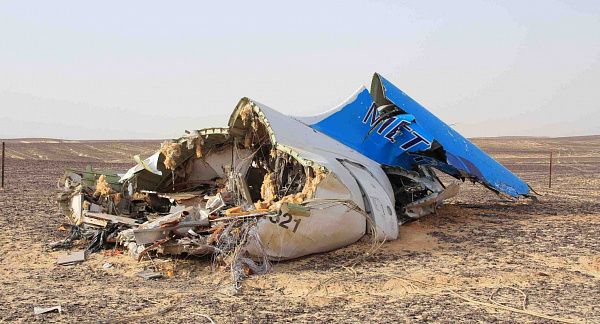 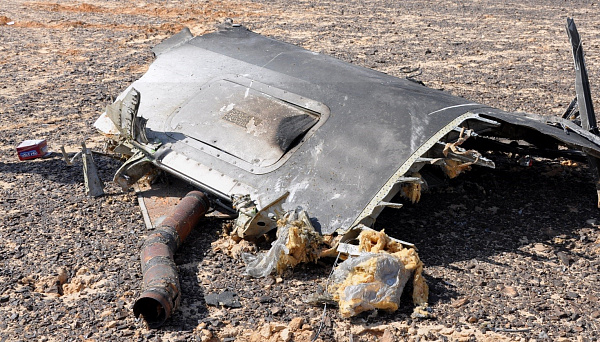 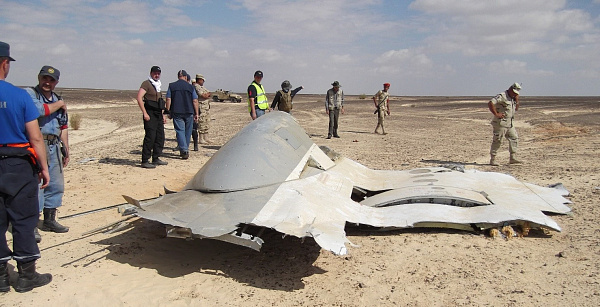 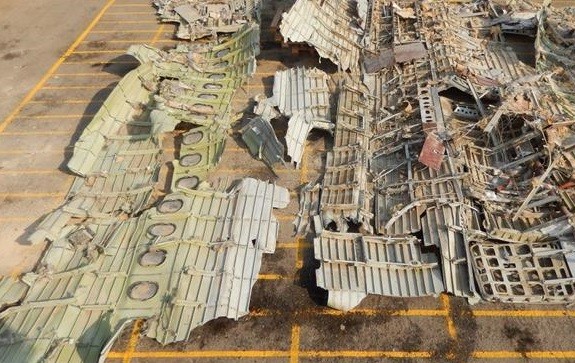 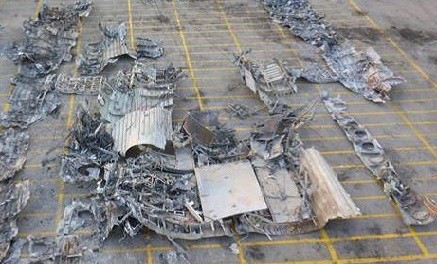